When I was interviewing 200 bankers and banking staff working in Europe’s financial centre the City of London, perhaps the most telling was the language. Not so much the profanities– though there were many of those–nor the technical stuff and three-letter acronyms (TLAs). Most striking were terms that seemed designed to sidestep any possibility of ethical discussion. When discussing their banks’ use of loopholes in the tax code to help corporations and rich people legally evade taxes, bankers used words such as “tax optimisation” or “tax-efficient structures”. Financial lawyers and regulators who went along with whatever banks propose were “business-friendly”; cases of proven fraud or abuse became “mis-selling” and exploiting inconsistencies between two countries’ regulatory systems was ‘regulatory arbitrage’.

If you work for a big bank in the City, people explained, you do not ask if a proposal is right or wrong. You look at whether it is profitable and compliant, i.e. in accordance with the law. The banking talk is about “getting past” the legal department, past compliance, past risk, past internal and external auditors, and past the regulator. Once these boxes have been ticked, there is nothing to stop you.

And so the cliché of evil and immoral bankers does not hold up. Banks have vast structures with tens of thousands of staff in internal control departments, such as compliance and internal audit. Leaving the inevitable rotten apples and those caught up in the Libor and foreign exchange scandals aside, most bankers seem anxious about not breaking the rules. Instead, the question they ask is always: how, within those rules, can we game the system?

Before 2008 the bankers involved in the toxic products that were eventually to blow up did not wonder whether these products were good for clients, or the economy, or even for their banks–which could fire them in a jiffy anyway. Rather, the bankers would enquire if what they were doing was legal and, if it was, there was no more discussion.

For bankers “amorality” is the word. To them, it is fundamentally different from immoral. Gordon Gekko in the iconic film “Wall Street” deliberately breaks the rules, while in the “Wolf of Wall Street” Jordan Belfort is continually flouting the law. Gekko and Belfort are immoral. 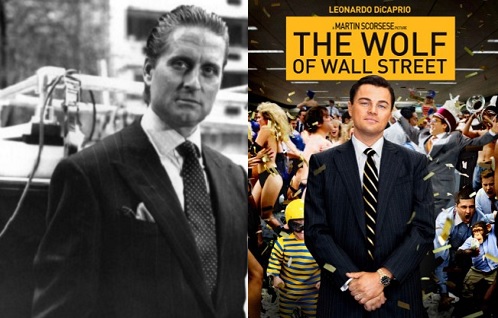 Amoral fibre: Michael Douglas as Gordan Gekko in “Wall Street”, and Leonado di Caprio as Jordan Belfort in “The Wolf of Wall Street”.

For an amoral decision, however, concepts like good and wicked simply do not enter the process. The question is whether something is forbidden or allowed and, if it is, the only remaining issue concerns reputation risk, and how it might look in the news.

Compartmentalisation is another word that bankers use: being upstanding and decent citizens at home is okay, but at work, hard selling lucrative financial products to “some guy at a small bank in Sweden” who clearly doesn’t understand what he is buying is also not a problem. The biggest compliment in the City is to call someone professional. It means you do not let your emotions get in the way, let alone moral beliefs–those are definitely to be left at home. The word ethics comes up only in combination with work, referring to an almost absolute obedience to one’s boss.

This is the mind-set created by an ideology of “shareholder value”; employees of a publicly listed corporation are taught and drilled into believing they have one task and one task only: to make as much money as possible for their shareholders–within the law.

Still, I pressed interviewees on the deeper moral dilemmas, about hiding behind laws that their bank’s lobbyists helped write, for instance. That’s where the laws exist: after all, laws always have to catch up with technology, so initially there are no rules governing new financial products, which helps explain the deliberately complex and highly opaque variations of the collateralised debt obligations that nearly sank the world economy in 2008.

In the final analysis, all the solemn promises of cultural change by top bankers in the aftermath of the Lehman Brothers’ crash are hard to take seriously. Banks are still publicly listed and therefore conditioned with the mind-set of amorality. The crisis may have had citizens the world over clamouring for a new beginning, but most of my interviewees claimed that at their bank it was back to business as usual.

Luyendijk, Joris (2015), Swimming with Sharks: My Journey into the Alarming World of the Bankers, Faber

International collaboration at the OECD Forum 2016

Base Erosion and Profit Shifting